The date is the 6th of September, 2018. It’s a cold, winter evening at the Astana Arena in Kazakhstan. Bauyrzhan Islamkhan and Jaba Kankava, captains of their respective national sides, meet in the middle of the pitch with the referee and his assistants. After the coin toss has been performed, the captains and officials have shaken hands and the players are ready, Kazakhstan v Georgia kicks off – and so does the UEFA Nations League.

The Nations League is a new competition adopted by UEFA in order to put meaningful matches into the international window slots. Gone are the days of pointless, half-hearted friendlies in the middle of October – there’s now this competition, involving all fifty-five of UEFA’s national teams in four divisions and with a competition spanning eight months. Here’s how it all works. 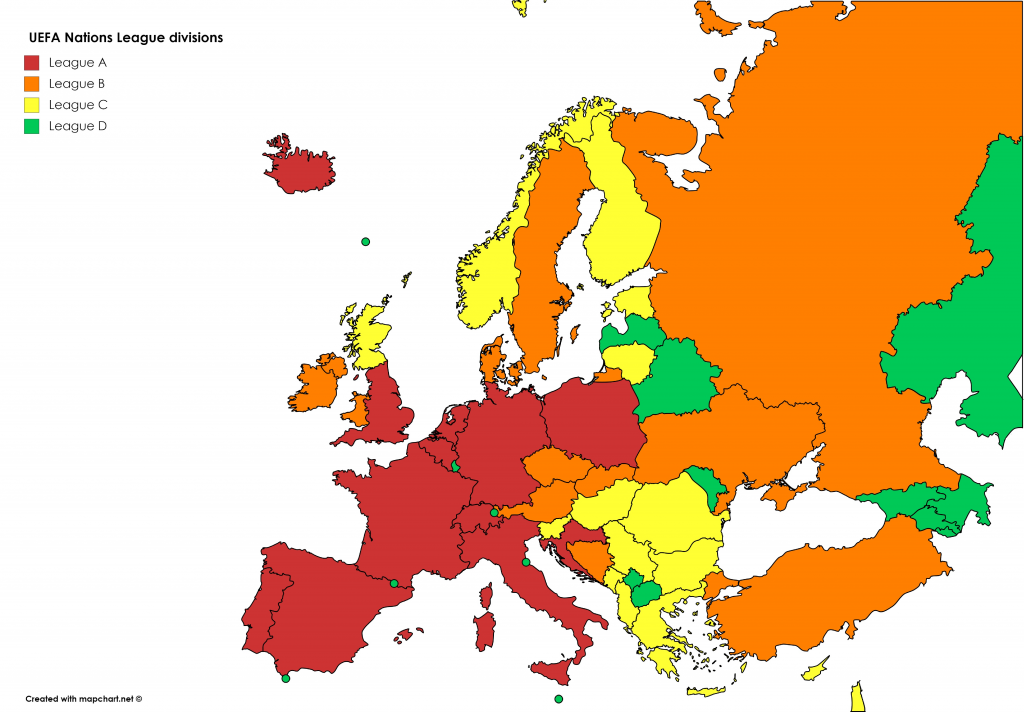 The teams have been divided into four divisions, with League A having the best sides in Europe, including all four World Cup semi-finalists, plus Portugal, Spain, Italy, Switzerland, Poland, Germany, the Netherlands and Iceland. At the other end of the scale, Group D has the weakest sides, like the aforementioned Kazakhstan and Georgia, as well as Gibraltar, Luxembourg, Macedonia, those sorts. Every league has then been divided into four groups, and every team plays every other team in the group home and away – yes, you get a fancy map for that too. 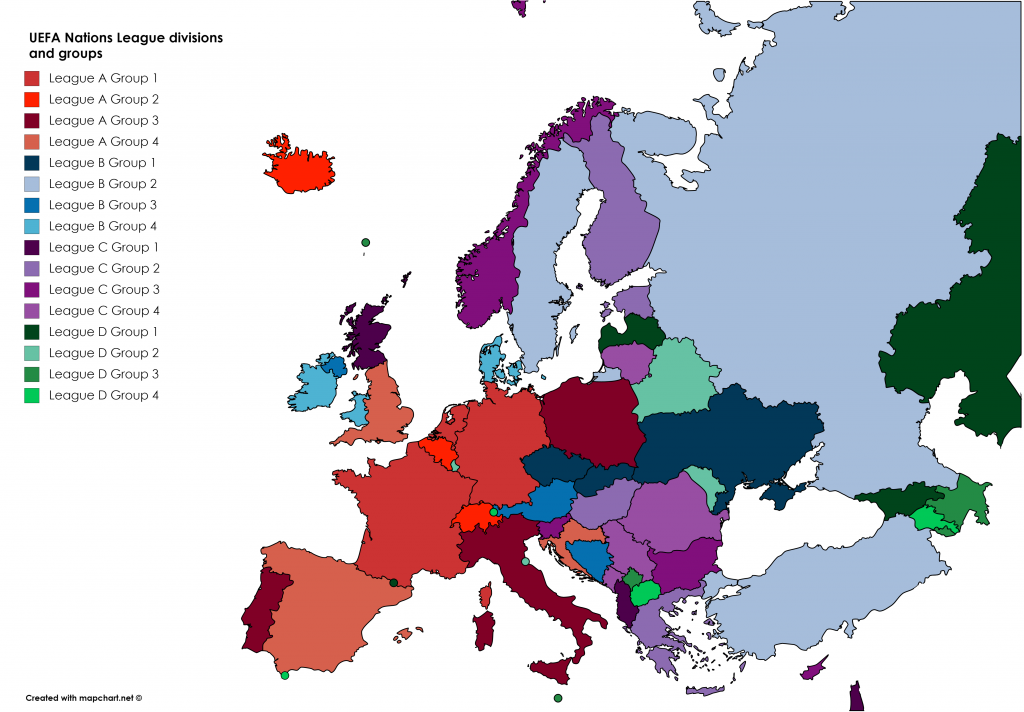 So, now that that’s all sorted, how’s it actually work?

Well, as I mentioned before, every team plays every other team in their group home and away, as per usual. The teams who finish top of their groups in Leagues B, C and D are promoted for the next season (2020-21) whilst those who finish bottom in A, B and C go down (there’s a technicality in Group C, but that’s not super important). These group games are played from September to November.

For Leagues B, C and D, that’s it for now. There’s promotion and relegation, like I’ve mentioned, and that’s it. The group winners of League A play semi-finals, and then a third-place match and a final. The winners of the final get a trophy and presumably an open-top parade just like any other tournament win. This will be at the start of June 2019.

Now 2019-20 won’t have a Nations League, because of European Championships qualifying being on. However, there’s a slight change to the way qualifying works. As always, the fifty-five nations of Europe are drawn into ten groups, and the top two teams from each group after qualifying will make it to the 2020 Euros. But there are still four spots left. This is where it gets weird, so hold tight.

What now happens is the top teams from each group that have not yet qualified for the final tournament go into a playoff. In League D, since no teams have qualified in this scenario, it’s simply the group winners. In Leagues B and C, it’s simply whoever comes top of each group, excluding teams who have already qualified.

There is one slight problem – in League B, one group (Slovakia, Ukraine, Czech Republic) has all teams already qualified. In that case, a team from a different group will get that spot.

Finally, in League A, the top team from each group that has not yet qualified will get the playoff spot. In Group 1, that’s the Netherlands, and in Group 2, it’s Iceland. In Group 4, England takes the spot. In Group 3, since all three teams are qualified and there are no other teams left in League A to give it to, then it will pass down to League B for their best team without a spot to take it.

OK, so finally we have the playoffs sorted. What now?

Well, each league has its own playoff. There are semi-finals and a final, and the winners of the playoffs will be going to Euro 2020. This guarantees a Euros spot to every league, meaning that a team from League D will be going to the European Championships. Only one of these teams (Latvia) has ever been to the Euros before, in 2004, meaning that it will almost certainly be this League D qualifier’s first time at the event.

And there you have it. It’s a complicated system, sure, but it should all become more clear in the coming months as the inaugural Nations League kicks off. It may be a success, it may turn to disaster, but we can’t wait for it to get underway. Nations League, bring it on.