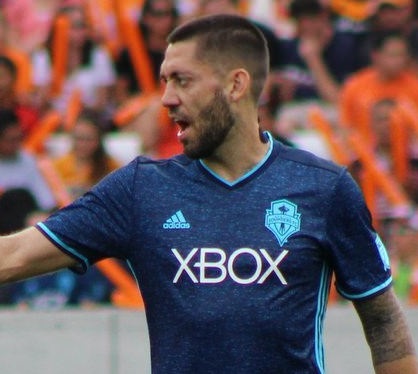 The footballing world heard the news today that after fifteen years, over two hundred goals and six trophies, Clint Dempsey has announced his retirement aged 35.

Now, when I think of Dempsey, what comes to mind is his time at Fulham in the Premier League, and of course, with Seattle Sounders in Major League Soccer. I think of his international career, in which he scored fifty-seven goals over the course of fifteen years. I think of his iconic No. 2 jersey he wore with both Tottenham Hotspur and Seattle. And of course, I can’t forget the time he stole an official’s notebook and tore it up on the field.

But of course, there’s more to Deuce’s career than that. I figure now’s a good time to take a look back on it, so we’re going to do just that.

Dempsey’s early life wasn’t easy by any stretch of the imagination. Born in a small city in eastern Texas, he grew up living in a trailer park and kicking a football around with the other kids there. He only really got his break by a stroke of luck, being noticed by a scout whilst juggling on the sidelines of his brother’s game. Eventually, he was forced to quit because of financial constraints but team-mates offered to pay some of his fees. His sister passed away when he was just twelve years old, but this gave him a new motivation to keep succeeding.

After success playing for a top-level Dallas youth side, he moved across the country to South Carolina and Furman University to study health and exercise science. And yes, of course he joined the football team, the Paladins, scoring seventeen goals in three years there and leading them to the Round of 16 in the NCAA tournament for just the second time in their history.

Dempsey was selected in the first round of the 2004 MLS SuperDraft by the New England Revolution. Now at the age of 20, Dempsey had to make an impression for the Revolution if he really wanted to push on – and that he did, starting all matches but one and picking up MLS Rookie of the Year 2004. The year after, he pushed on further, reaching double digits for the first time and taking the Revs to the MLS Cup Final. And in 2006, despite injury problems, he still managed to score eight goals in twenty-one matches and went to the World Cup in Germany, being the only US player to score a goal.

Of course, foreign sides started to take interest, as they do, and Fulham swooped in to sign him for $4 million USD. This might not sound like a lot, but it was 2006 and this was the most an MLS player had ever been sold for. And with that, Dempsey was a Cottager.

I would be lying if I told you he adjusted right away. In that first half season, he struggled. Dempsey netted only one goal in twelve matches, not exactly great for a forward. However, this was the goal that secured a 1-0 win over Liverpool, which kept Fulham in the top-flight. It was the season afterwards he really started to push on, with one goal becoming six, then eight, then nine, then thirteen. This doesn’t sound like a lot, but it’s worth remembering that there’s only so many goals you can score when you play for Fulham.

It’s now 2012. Dempsey’s just had the season of his life. He’s scored twenty-three goals – seventeen in the league – and he’s become the first American to reach fifty goals in the Premier League. The FWA Footballer of the Year award rolls around and he manages to come fourth, behind Robin Van Persie, Wayne Rooney and Paul Scholes. Of course, playing this well, there’s only so long he could stay at Fulham and in August 2012, he crossed London to Tottenham Hotspur.

Dempsey stayed at Spurs for only a year, scoring seven goals in twenty-nine league matches. His form outside of the league was better, with five in fourteen, but he wasn’t reaching the heights he had at Fulham, or that other strikers at the club had. That season, he was outscored by both Gareth Bale and Jermain Defoe, and instead of being in a starring role like he’d been in at Craven Cottage, he was one of the supporting cast. It’s no surprise that just a year later, he went back to the United States, and barring a two-month loan back to Fulham, that’s where he spent the rest of his career.

The first half season at Seattle Sounders wasn’t a great one, as Dempsey scored once in nine league games. However, he flourished in 2014, scoring fifteen times in twenty-six matches, his best season ever in MLS. He also managed ten assists and took the Sounders to a Supporters’ Shield win.  And of course, he scored at the World Cup, after just half a minute against Ghana.

From here, Dempsey’s career began to wind down. Fifteen goals became ten, then eight. In 2017, he had a better season, scoring twelve in the league and winning the Comeback Player of the Year, but with poorer fitness leading to speculation about his retirement, it was clear his career was coming to an end. After just one goal this season, Clint Dempsey retired.

The influence he had on the sport in America cannot be understated. Players like himself and Landon Donovan helped to elevate football in the United States to higher than it had been before. Dempsey brought America to the Premier League, sure, but he also brought the Premier League to America. He gave Americans someone to root for, and I think that will be his real legacy: bringing American football and European football closer together.