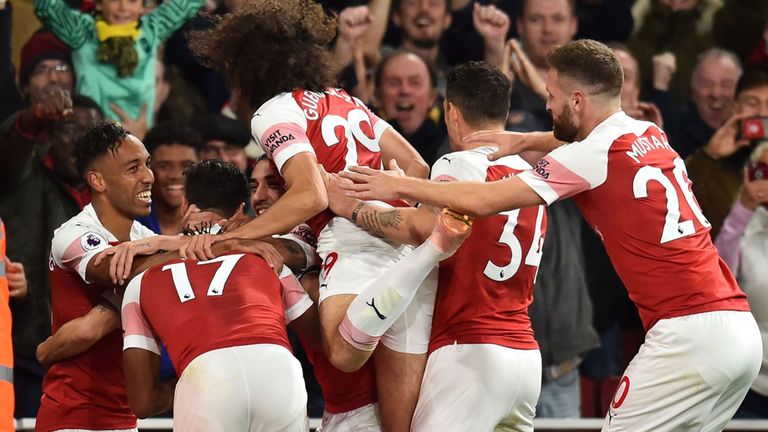 As an Arsenal fan myself, I expected my favourite club to struggle under the first year with Unai Emery, who became Arsène Wenger’s successor.

In spite of the first two defeats in the Premier League, they’re in, currently, a 10 game winning streak, which is impressive. Here are some points I’d like to take note of during these games.

The winning mentality is back.

Honestly, I’ll never know what Emery says during the half-time team talk in the dressing room, but it turns out to be something effective in return. This is the good thing about the Spaniard which helped the team to return to winning ways.

They could have given up when they conceded, however, they fought back instead. They’ll try to create chances to score and turn the tide. They did it against West Ham, Cardiff City, Fulham and most recently, Leicester City. But seriously, can they keep it up?

I’ll be very honest here – Arsenal are poor at defending. I get it, it’s impossible to form an impenetrable combo in defence. However, the players must aim higher and strive themselves to become a better defender.

Of course, it is still in the transition era of the Emery days and life is good for Arsenal fans. Be that as it may, if Arsenal are to come from behind and clinch the PL trophy in front of their fans, they have to understand the importance of good defending.

The arrival of Leno may be the music to the ears to the Arsenal fans. In all seriousness, it’s not good enough. The two nice pieces of news are, however, they have yet to concede a penalty and have a player sent off.

For the whole analysis of the situation, you may want to take a look at this.

The frontline and the midfield looks decent.

You can laugh at the name of the combination, but the truth is, “LMAO” are scoring goals. Lacazette, Aubameyang and Özil are on the score sheet in the past few games while it seems that Mkhitaryan is focused on the cup duties.

In midfield, Xhaka and Torreira work well with each other. Guendouzi may not be perfect but he’s certainly okay to play for Arsenal. Ramsey is a dilemma to be solved in January if he’s not leaving in summer. Smith-Rowe is the one for the future.

Arsenal may need a winger but they don’t have to rely on the transfer market. As long as their very own Reiss Nelson is coming back from Hoffenheim, I believe that this will be the solution to Aubameyang’s ageing and other complications.

“Rome wasn’t built one day but so far, so good.” This is what I’ll say about the midfield and attack of the current squad of the North London club.

We have to admit that Arsenal are not ready for the title.

No one loves listening to uncomfortable truths but Arsenal failed to perform their best. They haven’t been consistent in the first 45 minutes in every game, which is a dangerous sign if they really want to aim for the cups.

From what I’ve observed these days, the lineups of the champions consists of mostly – if not all of them – steady players on the pitch, both in form and of good technique. Arsenal does have commanders in the dressing room but they’re not constant enough.

This is why Arsenal need leaders like what Tony Adams, Sol Campbell and Patrick Vieira did in the past to lead the boys to keep moving forward.

Right now, Arsenal are two points off the top spot, which means that they still have a chance to make their ultimate target a reality. At the same time, they’ll need to pray that Manchester City, Liverpool, Tottenham and Chelsea to lose games.

Will we see the 1989 miracle to happen again in 2019, where Arsenal will be crowned as the “Champions of England” on goal difference? Only time will tell but Arsenal certainly needs to deserve the luck to become one.

We all know that Wenger and Emery are two types of managers in football. To add to the point, Wenger was the kind grandad who gives everything you want and Emery is the strict father who tells you what to do all the time.

Sure, Emery doesn’t have the same level of charisma that Wenger used to have, but he’ll certainly help the team using his experience and wisdom. Wenger is a wise old man, at the same time, he was too stubborn to make changes and cost a lot of it.

On the other hand, Emery is a demanding coach who asks his players to give their all for the win. This mirrors the philosophy of his predecessor Arsène Wenger, who once said, “you cannot play for Arsenal and give up, no matter what the score is”.

It creates a clear contrast against the final days of the Wenger era where the Frenchman’s men gave up and conceded more goals when they were one or two goals down. This wouldn’t be allowed under the Spaniard, which is a good thing to hear.

To sum up, it is always delighted that Arsenal are making progress under Emery. They’re not only winning but also, striving to improve. I’m pleased to observe all these details in every 90 minutes they’re involved. Upwards and onwards. COYG!