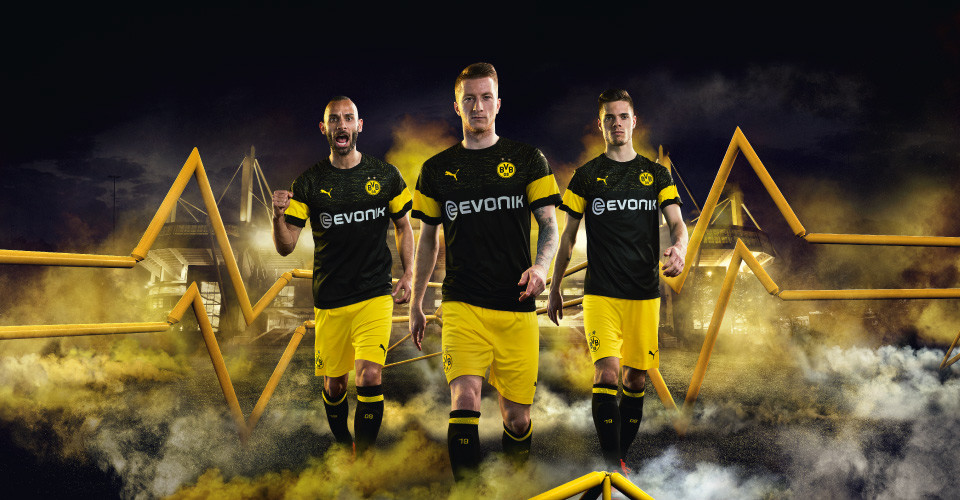 With Bundesliga veteran Lucien Favre as the manager of the team, Borussia Dortmund are currently unbeaten in both the Bundesliga and the Champions League, which is the music to the ears of the fans of the club (and sad Minecraft music to Bayern Munich supporters).

This may be the best chance for the North Rhine-Westphalia club to recapture the Bundesliga trophy from Bayern. While it is far from being an amazing run for the Borussens, if the players continue to do well, they are capable of creating a miracle this season under the Swiss.

Against RB Leipzig, Hoffenheim, Leverkusen and Augsburg, they have shown that they can stage comebacks, whether at home or away and however impossible the scoreline was.

This is excellent since Favre has, successfully, instilled the winning mentality to the whole squad, which propel them to do better and keep moving forward, until the last kick of the game.

Without a doubt, this is one of the factors which turns title contenders into champions.

If Dortmund can keep their amazing mindset from the Klopp era, even if they can’t lift the Meisterschale at the end of the season, Favre should be applauded for his effort for inspiring the squad to fight against the odds.

Aside from Reus, Kagawa, Mario Götze and Maximilian Philip, loanee Paco Alcácer is currently in superb form with 7 goals in 4 appearances for the Black and Yellows.

With future talents like Pulisic, Bruun Larsen and Sancho started to be on the scoresheet, I’m quite assured that the offence of the team should not be a problem for tearing the opposition defence open.

After the 1-1 home draw against Augsburg, they lost against Hertha away and Mönchengladbach at home. They also dropped 2 home points against Ajax in the Champions League.

With Dortmund gaining points in these matchdays, this gives the Black and Yellows the numerical advantage on Bundesliga the table. The rest should be self-explanatory.

Despite the fact that Dortmund under Favre looks promising, there are still problems to be prevented and fixed.

Reason 1 – Injuries are a thing.

It doesn’t matter which club you support, you hate it when injuries hit some of the key members of your team. Dortmund may have a young, talented squad, but sadly, they’re always hit by sufferings and discomfort of the players.

Marco Reus could be seen as a classic case in which he missed out the successful World Cup campaign with Germany in 2014. He did, finally, join the 2018 edition but we know how poorly the squad performed in Russia.

To win the Bundesliga, playing well isn’t enough. A healthy, fit crew is one of the keys to the road of obtaining the trophy. It seems that the medical team of the club is doing well these days but let’s wish that the injury list won’t be piled up.

Reason 2 – Bayern will bounce back.

Last season, Peter Bosz led Dortmund to a good start in the Bundesliga, yet they suffered a few consecutive defeats and not surprisingly, Bayern won the title, benefitting from the poor condition of their fierce rivals.

Just because they’re halfway there doesn’t mean that they won’t slip up afterwards. Bayern may be 5th on the Bundesliga table but when you take a look at the differences of the points against Dortmund, they still have the chance to turn the tide.

Thus, Favre and his men would need to work very hard to extend their unbeaten run. They’ll certainly make mistakes when they play in their jerseys, but it’ll be best if they don’t afford a margin of error in their training ground, which is what Favre is good at.

Reason 3 – Poor defence yet to be fixed.

Like Arsenal, Dortmund are facing a problem that they don’t have a good defence.

Diallo may be a good CB but sometimes his rash challenges can get him sent off. Hakimi performs well but Real Madrid may be desperate to get him back. Piszczek is too old while Schmelzer is too injury-prone. Toljan and Toprak aren’t good enough.

Aside from the defence system, goalkeeping is a problem. I’m not discrediting Roman Bürki’s effort between the sticks but he is quite inconsistent, to say the least. 3 clean sheets in 9 games showed that it’s almost time for the Swiss to look for a new club.

Thus, Favre must take a look at the problems of the defence and in goal to see what kind of players they need. But it’s not enough as the integration of new members into the XI is as hard as acquiring them, in reality.

Borussia Dortmund this season can be both exciting and worrying to watch.

On one hand, they’re making significant process and are improving during the last few games. On the other hand, Bayern Munich will be doing everything in the power to put the game beyond reach.

This is why Dortmund will require both hard work and a bit of luck if they want to snatch the deserved Meisterschale from the Bavarians at the end of the season. Come on BVB! 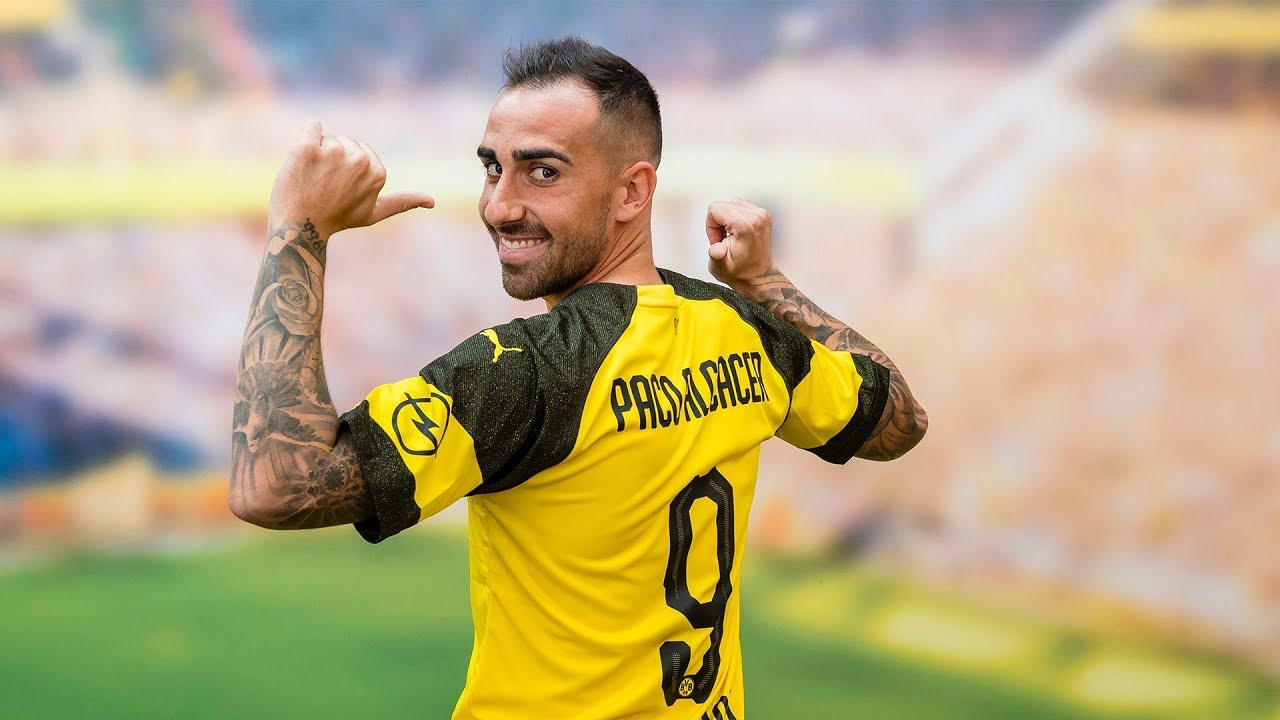 Barcelona supporters may have trouble in believing this: Paco Alcácer, the fourth forward in their squad, can’t stop scoring after leaving Camp Nou on loan to Borussia Dortmund, a German Bundesliga giant.

Under Lucien Favre’s guidance, the Spaniard started to find his sense of scoring. And currently, with 10 goals from 10 shots on target, no one would have expected him to be in such a good form.

The 25-year-old used to be a player who lived under the shadows of the players, in the likes of the mighty Leo Messi, Luis Suárez, Neymar and later, Ousmane Dembélé.

Alcácer’s current situation is a blessing to the Dortmund squad. At the same time, Barcelona would be having a headache for the rest of the season in attracting him to be back to the Catalonian capital.

With an urge for Dortmund to activate the release clause of the loan contract, this is where it gets complicated for both clubs to handle.

To be honest, Alcácer is the solution to one of the problems of the Dortmund squad.

Dortmund may have quality players like Marco Reus, Jacob Bruun Larsen, Maximilian Philipp and Marius Wolf, but the lack of an in-form, traditional No. 9 player is what the BVB are yearning for.

Pierre-Emerick Aubameyang did a great job when he donned the Borussen jersey. However, he decided to leave for Arsenal with the German club getting a whopping €63.75M fund in the process.

Michy Batshuayi joined the party on loan from Chelsea as a side-effect of Aubameyang’s transfer.

He did well in the Bundesliga by scoring goals in the last minute to save Peter Stöger’s job, only to have his career there marred by a sudden injury against old rivals Schalke 04 in the Revierderby.

Now, with Alcácer who’s on fire, it is almost certain to say that the whole BVB attack is complete. It’ll be the best if the Spaniard keeps up his form and call Westfalenstadion his “home” after the season.

For Barcelona, the primary objective for them is to take place of, if not replace, the currently misfiring Suárez, who has yet to score a goal after the away win against Real Sociedad.

Munir El Haddadi is, at present, Valverde’s first choice backup to the Uruguayan. Despite assisting the team in salvaging a point from Bilbao at home, the striker spends most of his time on the bench.

The 23-year-old may be the player for the future of Barcelona as Suárez is ageing. However, despite the loan experiences with Valencia and Alavés, he’s still not experienced enough to be a “super sub”.

With 10 goals in 10 appearances for club and country in the ongoing season, the Spanish club may regret in letting Alcácer go, especially if the player decides to make the move permanent.

At the same time, though, they understand that Dembélé was a transfer for the future. Alcácer may be a good player but for Barcelona, they may want to develop the young, French striker more.

So for Bartomeu and his men, here’s the question, “if you can keep only one player, would you rather keep Dembélé or Alcácer?” And the answer is, frankly, obvious.

In short, this deal of Paco Alcácer is complicated, provided that both clubs have contrasting interest in the deal. Dortmund would want to secure the player’s ownership rights while Barcelona are seeking for a “super sub” in hot form.

Dortmund would be more than happy to pay the cash if Alcácer continues to score, yet Barcelona won’t afford to lose him. Anyway, it may be too early to say, but only time will tell if the agreement is worth the transfer fee stated or not.