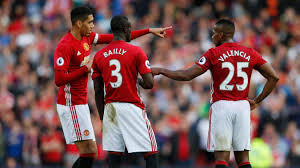 Defensive football is atrocious. It’s bad enough that a fan of any club has to sit through the passing around of the ball at the back, but, as a Manchester United fan, with a deep-rooted history in playing attacking football, it hurts just that little bit more.

Unfortunately, under Jose Mourinho, we are doing anything but. The football we are currently playing, to be frank, is boring.

Because as we all know, United’s defense is utter garbage.

Bailly, Lindelof, Smalling, and Jones all do not know how to defend. It’s as simple as that.

But when you look at the other side of the pitch, the options are very different.

Look, United’s back line is an utter shit show. There is no escaping that fact.

But, United could have a rock solid attacking unit. If we abandon defensive football, acknowledge that we are gonna concede every game, and simply try to outscore our opponents, we might be having a much better time in the game.

With Mourinho on the cusp of getting the ax, this could be his main hope to keep his job.